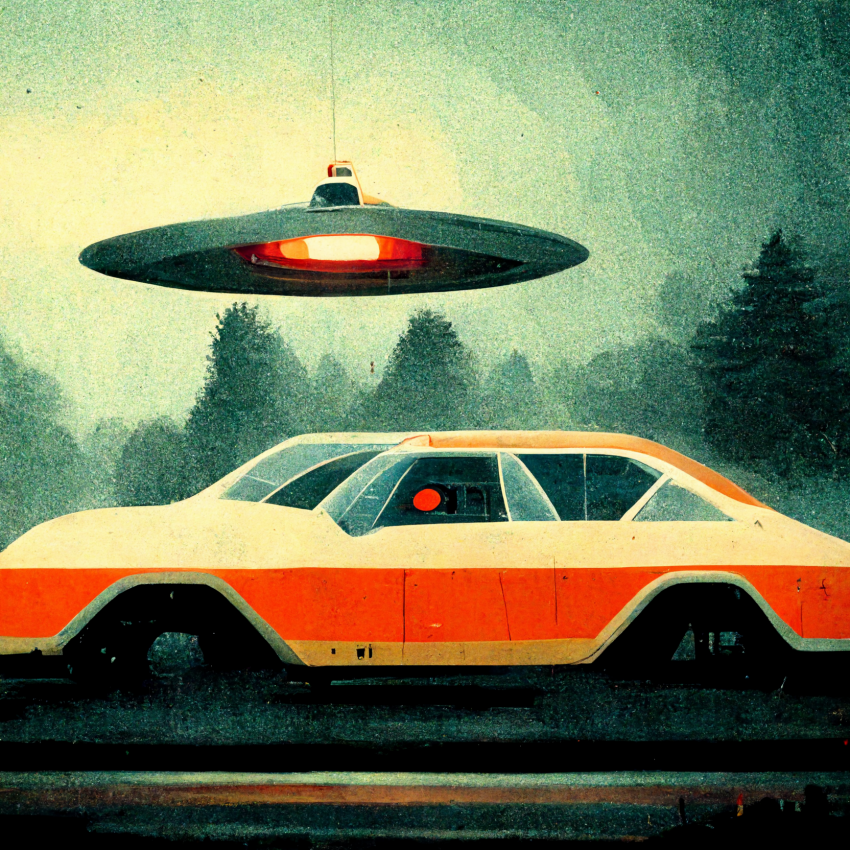 Audio version of this story on our YouTube: https://www.youtube.com/watch?v=-1EJBdelx5Y this can also be found Spotify and most other podcast platforms!

For today we have a story sent in by a fan named Clifton from an encounter he had in Virginia back in 1974. I hope you enjoy it!

It was a late summer night about 11:30 p.m.in August of 1974. I was about 17 years old at the time. I was driving to my home in Nace, Virginia, which is located between Troutville and Buchanan. I was coming home from my girlfriend’s house in Salem on Route 11 passing through Troutville. Coming into Troutville I had noticed some relatively low lights and thought it might be a plane making its approach to Woodrum Field in Roanoke.  All of a sudden I realized that the lights did not seem to be moving and I began to slow down until I came to a dead stop right in the middle of town in front of the old Troutville elementary school. That’s when I noticed a dark triangular craft about 150 feet right above me with a bright white light on each corner.  My anxiety was rising fast and I felt the hair on my arms and neck standing up.   I rolled down my window on my 1963 Oldsmobile and leaned very far out and looked straight up.

I was immediately impressed at the size of the craft as it was at least as long and wide as a football field. I also noticed there  were no engine or motor sounds but only a deep humming coming from the craft. It was so intense that I could actually feel the humming in my body. Now I was completely at a loss as to what I was seeing or what I should do. I had a gun in the car and a quick thought passed through my mind that I should get it but thankfully that thought went away as quickly as it had come.

This was when the fear crept in as I realized how actually close to this craft I was and there had been no cars coming from either direction in the short time that all of this had transpired. Erratic thoughts started racing through my mind. Would it try to hurt me, or even worse would it try to take me? I quickly ducked back into my car, rolled up the window and stepped on the gas, actually I floored it and exited Troutville heading north on Route 11 towards my home in Nace. Now my ‘63 Oldsmobile was what I called a tank due to its size and being made up almost completely of steel. Route 11 is a four lane highway there, two lanes in each direction and I had pegged the speedometer at 120 MPH and I was cutting corners. I could see that the craft was still very low and right behind me following as I sped along. I was very frightened! When I came to the turn off on my right to go to Nace on a backcountry road I noticed another car coming from the opposite direction. We passed one another just as I slowed way down to turn off of route 11 and the other car was proceeding towards Troutville. It was now that I noticed the craft had stopped following me and was following the other car back towards Troutville.

While I was glad that it was no longer following me, my fear had not yet subsided. I continued to speed the rest of the way home. Upon entering the front door to my house I saw that my Mom and Dad were still up and they immediately noticed the state I was in.  I told them what had happened and I was sure they were going to think I was nuts but my Dad said that he had seen several things in the sky out where we lived and he was really not surprised at my story.

Forty-eight years have passed since that night and I still remember it like it happened last night. I went on to spend 20 years in the Army and only shared this story with about 10 people in that amount of time. I never talked about it a lot because I did not want to get the looks and hear the comments that I feared would come my way. I have never made the judgment as to whether or not this craft was alien or something from this world. I personally believe it was something from another world. The government of our country has finally admitted that there are UFOs but they really have not commented any further.  I believe they know very much more about these things but for some reason they do not want to share it with the American people.

Before this I was really not a believer but now I know that they are out there. I wish we were informed of everything ours and other governments know but that may not happen in my lifetime. I still watch the sky and always will.

All I can say is WOW! Thank you Clifton for sharing this story with me to use on the site. This has been one of my favorite stories I had sent in so far. Remember if you have had a paranormal encounter like this and want to send it in you can email us at webmaster@spookyappalachia.com.

Also a big thank you and shout out to all of the other content creators who have helped us grow!