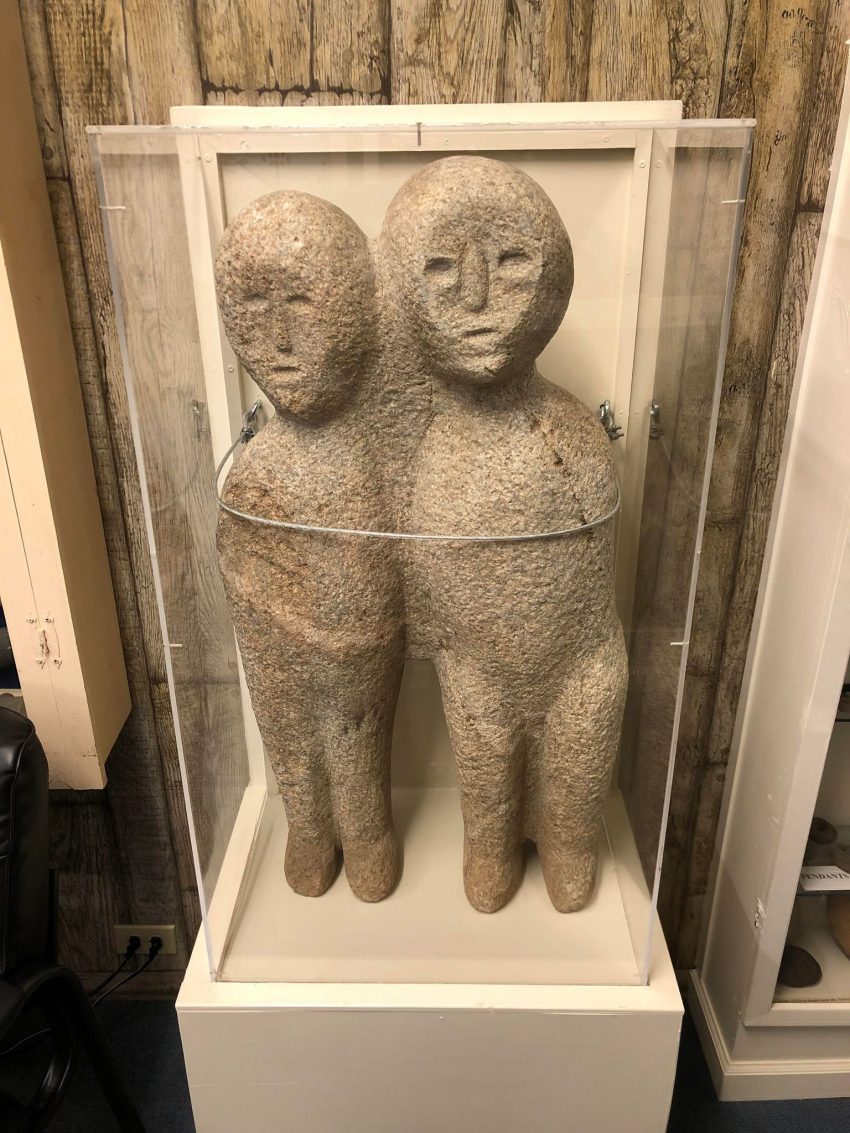 Audio version of this story on our YouTube: https://www.youtube.com/watch?v=QH_q8peJ654 this can also be found Spotify and most other podcast platforms!

If you ever visit the Cherokee County Historical Museum in Murphy, North Carolina, you’ll find tons of Cherokee artifacts, tools, and dolls. If you head to the museum’s basement, you’ll notice a strange statue inside of a glass box. Two strange conjoined figures, standing at about 3 feet tall and with alien-looking faces, will stare back at you through the glass. Unearthed sometime in the 1940s, this statue is apparently of a local legend: the moon-eyed people.

Most believe that the Cherokee moved into the area around Murphy, North Carolina, sometime around 1100 or 1200 AD. According to local Cherokee folklore, there was already a race of people living in a village in the area where the Hiwassee and Valley Rivers converge. These people were short, with very pale/white skin and blue eyes. Their eyes were so blue that they couldn’t see during the day, so they only came out at night. The Cherokee called them the moon-eyed people.

When I first heard about this story, I found it fascinating! A lot of people say that these moon-eyed people are aliens. The description does seem very similar to those given by many people in alien encounter stories. Looking at the statue, who wouldn’t think of aliens at first glance?

One similar encounter I thought of was the Kelly-Hopkinsville Encounter in 1955. Reports described these creatures as silvery-skinned and between two and four feet tall. However, these creatures had large yellow eyes with a sensitivity to light. I’ll likely cover that story another day in another post.

One popular theory is that the moon-eyed people were Welsh settlers that landed in Alabama in 1170 and eventually settled in the Murphy area where they were seen by the Cherokee. They had never seen people with pale skin, blonde hair, and blue eyes, so it makes sense that they may have thought these people were very strange looking!

What do you think these moon-eyed people really were—Welsh settlers, aliens, or something else entirely? Let us know in the comments!

Do you have a paranormal story? We would love to feature it. Email us at webmaster@spookyappalachia.com.

Check out our other urban legend stories

1 thought on “The Story of The Moon-Eyed People”