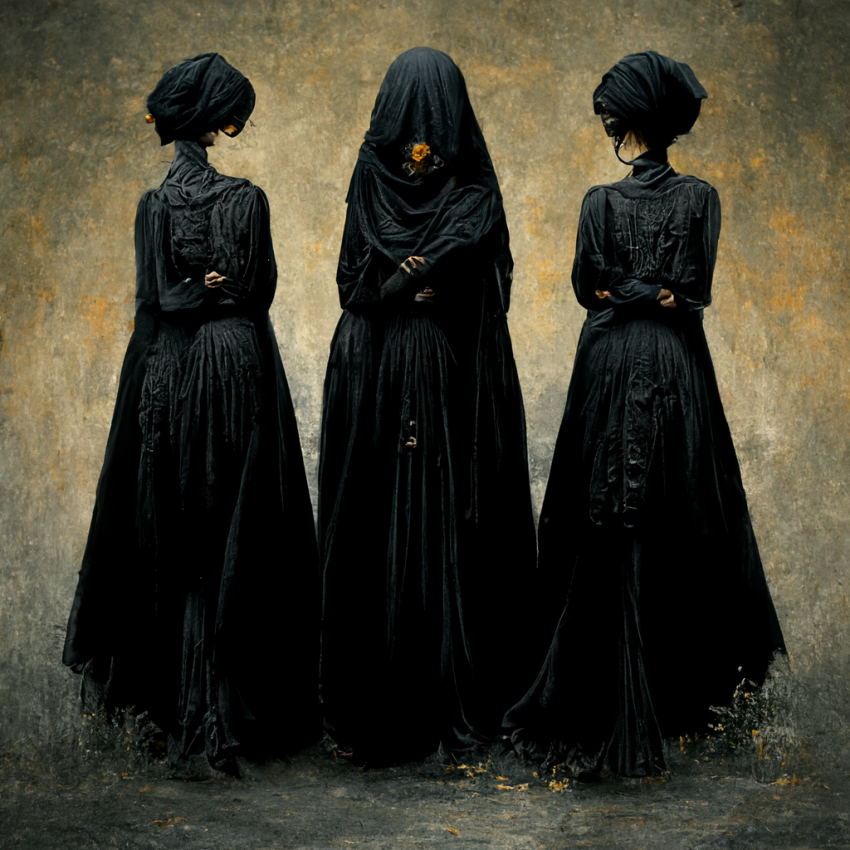 Audio version of this story on our YouTube: https://www.youtube.com/watch?v=IpA9HJZrRKM this can also be found Spotify and most other podcast platforms!

I’ve been wanting to cover The Black Sisters since I started Spooky Appalachia, but I’ve been waiting for the right time. With a movie coming out soon I thought now might be a good time. I grew up in Christiansburg, Virginia, and I’ve heard many stories about the Black Sisters. Today I will share with you some of the local legends and stories I’ve heard.

From what I can find, the three sisters were called The Black Sisters because they wore all black clothing. From the stories I heard, they wore black dresses, shoes, gloves, hats and veils, as though they were going to a funeral, or mourning. Their names were Mary Snead, Caroline Martin, and Virginia Wardlaw. Mary and Caroline came to Christiansburg around 1902 to help their sister Virginia run the Montgomery County Female Academy.

Around this time a few mysterious events began to happen. First there was the disappearance of a controversial illegitimate baby birthed by one of the students at the school. Shortly after, Mary’s son John was found burned to death in bed just a week after his mother and aunts had taken out a very large insurance policy on him.

Sometime later, Caroline’s daughter Ocey came to town and married her first cousin (Mary’s son) Fletcher Snead. Sometime after, Ocey became pregnant and Fletcher left town, and so it was up to The Black Sister to take care of her.

It turns out they didn’t take very good care of Ocey and the baby at all. Shortly after the baby was born it died due to malnutrition. After that, Ocey was found drowned in the bathtub just days after a large insurance policy was taken out on her as well.

After all of these events occurred, the sisters left town for New Jersey. Soon after their arrival the authorities caught up with them. Caroline was convicted of Murder and sentenced to 7 years in a mental hospital where she later died. Mary pleaded guilty but got off on a technicality, and after that she fled to Colorado. Finally, Virginia starved herself to death before she ever saw the judge.

So where does the paranormal aspect of this story come in? From what I’ve heard there are two locations that one or more of The Black Sisters are said to haunt. The first one is the old Christiansburg Middle School building. The former middle school, which is now the Montgomery County Public School’s technology center, was built on top of where the Montgomery County Female Academy stood. There have been reports of lights going on and out randomly, whispers, footsteps in the hallways when no one is around, and dark shadowy figures in some of the rooms and hallways.

This pretty much sums up what I’ve heard over the years. I hadn’t written a story on this topic yet because I’ve been so afraid that I would mess it up. Hopefully I did this story justice and my home town doesn’t hate me for it. If you’ve ever had an experience you think is related to The Black Sisters, or any kind of paranormal experience that you’d like to see featured on Spooky Appalachia, you can email us at webmaster@spookyappalachia.com.