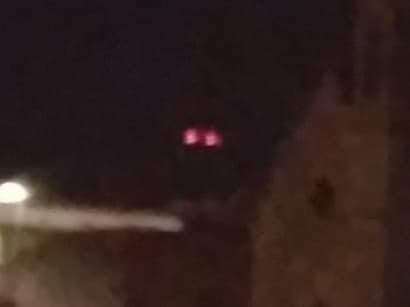 Audio version of this story on our YouTube: https://www.youtube.com/watch?v=I7mu5ZJxgy4 this can also be found Spotify and most other podcast platforms!

For today’s story we have a possible Mothman encounter story sent in by Natasha. This one is particularly interesting because it’s a very recent Mothman sighting in West Virginia and her friend got a photo! I hope you all enjoy this as much as we did!

I’ve seen a few posts now for people looking for something fun and scary to do, so what better time than to tell you about our trip to Cairo, West Virginia the other night.

First we stopped off at the school to take a quick tour inside but we were chased out by bats so we went down another road which ultimately got us lost and scared that our vehicle would roll over the hill. We didn’t stop there! We continued out to Silver Run tunnel 19, but instead of walking we decided to drive through. Upon coming to the opposite end, we looked over to a picnic table and all we saw were two bright red lights on top of this table. The odd part was the lights would appear and disappear. So two brave souls got out to look and one of them actually picked up two tea light candles, yet the candles were cold and were never lit so he kicked the candles to the woods and we backed the hell up and went to speed out of there. Then we decided to stop in in middle of the tunnel and turn the lights out while letting my son in law and another fella out, we lock the doors and go to speed off to mess with them but then my son in law comes hauling ass back to the vehicle and starts begging to be let back in. Once again these two red lights followed him into the tunnel. Mind you there were six of us total and we all watched these lights blink like they were eyes. So I stepped on the gas and we got the hell out of there!

The even crazier part of all of this was when we got to the bridge to come across back into the little town, we came to a stop and suddenly you could hear the loudest scratching noise come across the outside of the vehicle. Of course, we all say what the heck was that and we sit there for a minute. My son in law got out and looked under, over and all around the vehicle and not a branch, twig NOTHING in that road, we booked our butts outta that town fast as crap, and I hold my hand to God this shit really all happened. That was my second most creepiest encounter at Silver Run in Cairo and I can say I’m definitely done with that place.

I’ve also sent along a photo my friend managed to take of it.

Pretty incredible story, and with a photo! Not many people have gotten them. We feel extremely lucky to have been given permission to use this. Thank you Natasha!! Remember if you have had a paranormal encounter like this and want to send it in you can email us at webmaster@spookyappalachia.com.