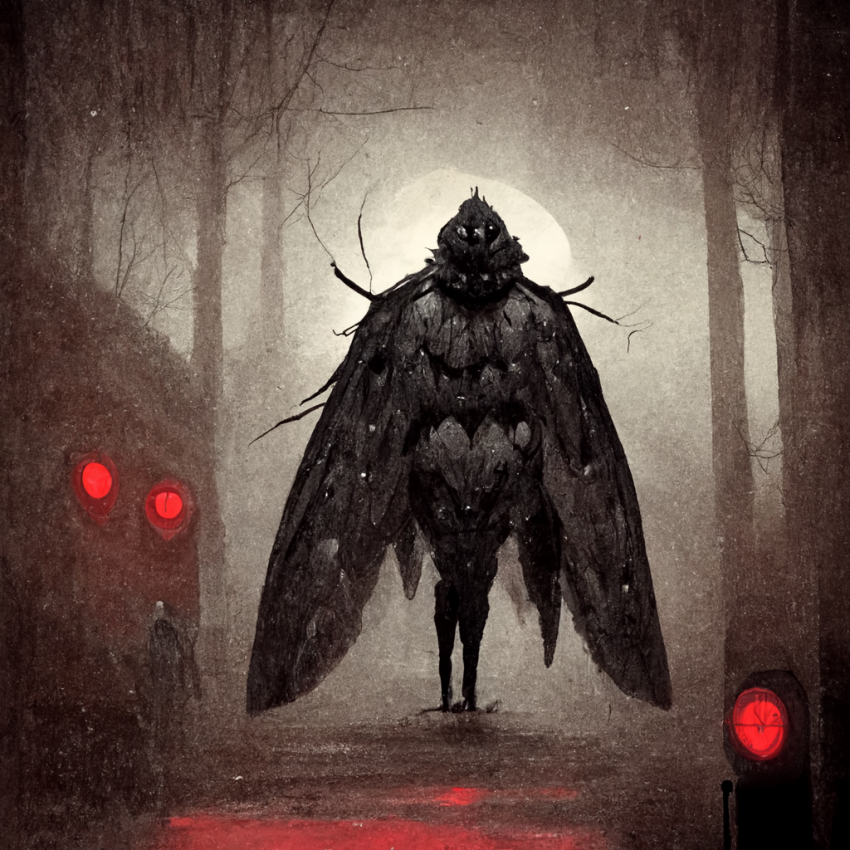 For this week’s story, given the popularity of Mothman, I decided to reach out to our friends at The Mothman Museum. This story is the first of about 22 sighting stories sent to us by the museum. The encounter happened in Arkansas, but I decided to go ahead and use it since Mothman is well known to be primarily an Appalachian cryptid, and because everyone loves him so much!

Hello there, I am sure you probably get thousands of emails about strange happenings and bizarre events, but I have something for you too. I haven’t heard of “Moth Man” until today as a result of what happened to me last night/early this morning. I was told to look on the internet to find something by friends at work who I solely trusted with this that would not think that I was crazy or losing my mind.

To start off with, I live in a small town, Jessieville, Arkansas. It’s just outside of Hot Springs Village, Arkansas. I go by “Lone Wolf”. This is what happened to me last night/early this morning:  I live in a very small camper. Last night wasn’t any different than any other night. There are 2 Belgian Mules and 2 ponies with about 6 horses that freely roam this 64 acre property. I leave to go to work around 4 a.m. so I go to bed about 6 or 7 p.m. Sometimes in the night, I hear the roaming of the animals here along with them once in a while of scratching themselves by rubbing their bodies on the camper. Nothing strange about that.

About a week ago, I changed the sleeping position due to the headlights shining through the camper from my niece’s car when she got home from work. Last night, I was really more restless than usual. There were a lot more noises outside around the camper than usual. There was also something pounding on the camper in the middle of the night. I remember waking up due to a light that was very bright coming through the window. For a moment I thought that it was my niece coming home, but then, I realized, the window without a curtain is facing the wooded part of the property. I was awake then. It wasn’t an ordinary type of light. It was very intense and had an orange-red glow to it, almost like a setting sun. I looked out the window, but I couldn’t see anything. I had the sense that someone or something was watching me. Believing that there is a logical explanation for everything, I just rolled over and went back to sleep, or should I say, I tried. I felt the camper move like something was pushing on it, but thought it was just a mule or a horse. Then there was pounding on the camper again. I have an electric heater in the camper and remember awakening to be very cold and the sense that I wasn’t alone. I opened my eyes and thought I saw a large black shadow looking at me for a few seconds. It was gone. I breathed very deeply for a few moments and saw my breath condensate in the air. It was extremely cold on the camper for a couple of minutes. I looked at the clock and saw it was time for me to go to work. I got up, changed and checked the door to make sure it was still locked-which it was. I went out to my van and started it, turned on the lights and noticed that there were feed buckets on the ground. I picked them up and put them in the back of my brother’s truck. I drove out, opened and closed the gate and then proceeded to drive to work. I usually have about a 45 minute drive to work. I remember going through an S curve and seeing a white plastic bag in a tree on the right side of the road. For some reason, it caught my attention. Just after I turned my head, all of a sudden, I saw a swarm or about a hundred or so like birds, bats, moths, I don’t really know, it happened so fast, coming right down the middle of the road. I cranked the steering wheel hard to the left and tried to avoid as much contact as I could with whatever they were. I remember hearing thuds off my van and seeing things bounce off my windshield and the front of my van. It was like they all had these small bright red eyes or something, they were like tracing flashes off my van. Strange and bizarre, yes indeed. It was around 4:15 a.m. in the dark. No birds are flying at that time. It’s winter here and the bats are dormant. It’s too cold for insects right now. I just know that they looked like bats to be the closest thing that I can think of. I never stopped and kept on driving to work. When I got to work, I left the lights on and got out and checked for any damages. There was nothing there. A work friend came over and asked me if I hit a deer or something. I was still a little shaken up and kept faith in telling him what happened. I still had the sense that something was watching me and kept looking over my shoulder all day long. My friend from work told me about Moth Man and said I should watch the movie and check the net out to see if anything compares to what happened to me. He also told me to let him know what goes on for the next couple of days. Boy, that was something really nice to hear, thinking that I was done with this ordeal.

All through my work day, I tried to make sense of any of this and couldn’t. I finished out my day at work and drove back home. I even stopped where I saw that plastic bag in the tree and looked all over for something and couldn’t find anything.

I got home and told my brother, I still have this feeling that something is watching me. Also, the buckets that I put in the truck this morning were on the porch and the gate to the yard for my brother’s house was opened and his stud colt was out loose and as we know, no one put the buckets on the porch. It was also said that sometime during the time that I left for work and the time that everyone else got up here, there was knocking on the front door of my brother’s house. I know I picked up those buckets and put them in the bed of the truck and the yard gate was closed, I saw the colt watching me the whole time, the yard gate was closed. Can you make any sense of this ????

Thank you for your time, help and cooperation.  Thank you again, Lone Wolf………

Another great possible Mothman sighting! Remember if you have a story you would like to submit, be sure to email us at webmaster@spookyappalachia.com

For more cryptid stories check out the cryptid section of the site!