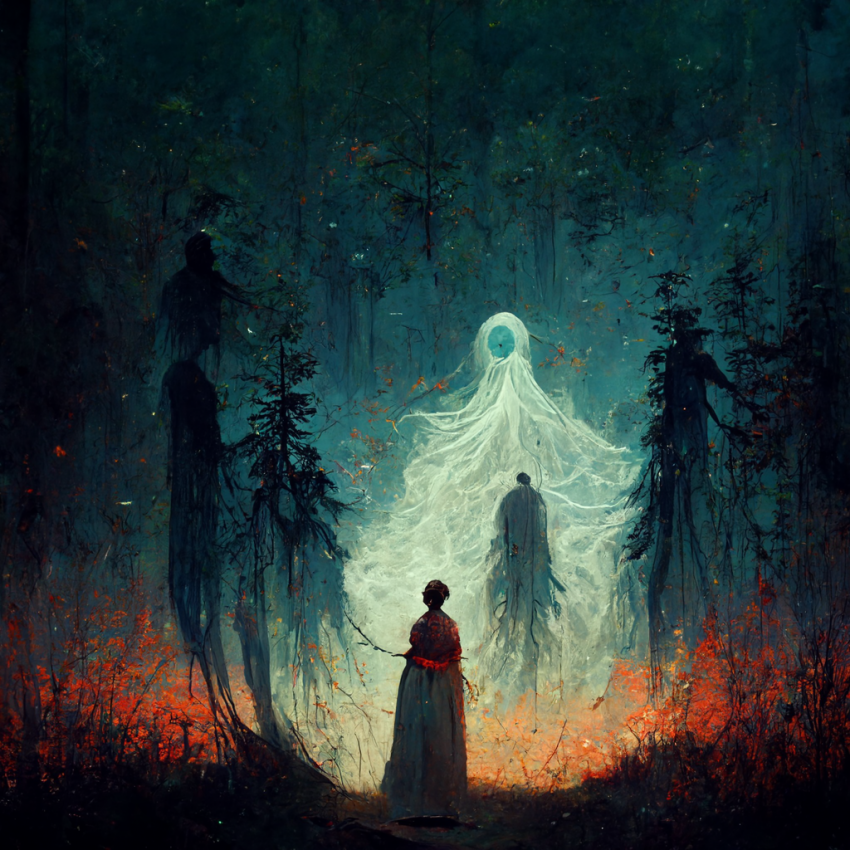 Audio version of this story on our YouTube: https://www.youtube.com/watch?v=H8xe5hihrD8 this can also be found Spotify and most other podcast platforms!

The following story was sent in by a fan who wishes to remain anonymous. This story is a tale of a good bit of family folklore told by their family through the years.

This story is about my third or fourth great grandfather, his oldest brother who I will be calling Richard for the rest of this story, and his youngest brother John. (That’s not their names but that’s what I’m going to call them for simplicity and anonymity’s sake.)

My family has lived in what’s now West Virginia since shortly after the American Revolution. This story takes place in the 1820’s or 30’s. Richard, his brothers, and sisters lived in a holler and over a hill in another hollar all their cousins and their cousin’s families lived. At the top on the hill out on one of the ridges was a family owned cabin that during the fall, spring, and mild winter evenings the cousins would go to. There they’d drink, gamble, play music. Richard’s family didn’t really partake in these activities, except for John.

Late one night Richard and his family were woken up by someone beating on their door. When he got up and answered he found John very angry and very intoxicated. John was demanding his brother let him borrow a gun, he kept going on about how the cousins had cheated, robbed him, and he was gonna go back over the hill and kill them all. Richard told him he wasn’t giving him a gun and for him to go home, sleep it off and calm down. After a bit John went stumbling off into the night.

The next morning Richard got up and before he could begin his farm work for the day he saw John walking up the road towards his house. As John got closer Richard could tell that he had been in a fight. His face and hands were swollen, bruised, and he had several cuts on his face. Just like the night before John demanded his brother let him borrow a gun. Again Richard said no and told him he needed to calm down. After several minutes of arguing John tried barging past Richard causing Richard to assault his own brother to keep him from entering his house. John cursed at his brother and promised one day he’d get revenge on his cousins.

Months went by and eventually John and Richard made up and started talking again. Then one day, late spring John and one of the cousins came to Richard’s house. They were laughing, carrying on, and clearly had been drinking but were in good spirits. John asked his brother if he could borrow some tools. They were heading out the ridge to start collecting firewood after the long winter. Richard said he was glad they had made up and told them any tools they needed they were free to take. Later that evening John returned with his brother’s tools and a cart of firewood as payment for letting him borrow the tools. They talked for a bit before John continued down the road to his own house. A few days went by and one afternoon Richard was visited by several of the cousins from over the hill which was pretty uncommon. After exchanging niceties they asked if Richard had seen their brother. Richard told them how he and his brother had come requesting tools and he hadn’t seen him since.

The cousins explained that they had found their brother’s cart, tools, and some wood in a ravine but they hadn’t been able to find their brother. They had even went in town and checked in case he had been injured and went to town to get help from the town doctor. Richard promised to keep an eye out for their brother and with that the cousins went back over the hill. Word of the missing cousin spread through the town and hollers and there was gossip about what might of happened and how John might’ve done something but no one really knew or had any evidence of any wrongdoing.

Months passed, and a particularly long and brutal winter set in. It was so harsh Richard, John, their other brothers, and even their sister’s families moved in with Richard so they could pool their resources to help survive the brutal winter. Eventually the pile of firewood started running low and it was decided the next clear day they’d have to wade out, attach sleds to their carts, and head up the ridge to gather more wood. John told them he knew a good place him and his cousin had found that had enough large timbers to get them through the winter. After a few days there was a clear and reasonable warm day. It was warm enough that the snow had started to melt in some places. John, Richard, their brothers, their sisters’ husbands, and even some of the older children gathered up tools and began the trek up the ridge to gather more firewood.

Once out on the ridge they got to work sawing, chopping, splitting, and filling up their carts and sleds. Suddenly all work came to a halt when they heard John screaming. They rushed to the noise and saw John sunk up to his chest in mud screaming and flailing, having an awful fit. They rushed to his aid attempting to calm him and pull him out but the harder they pulled the more it seemed like the mud pulled back. Finally with a strong pull they freed John but his legs and stomach had been ripped to shreds. His tore up pants and shirt soaked in blood and mud. They sprung into action, one of the brothers jumped on a horse and took off down the ridge towards town to grab a doctor, Richard and my great great great grandfather pulled John to a sled to try and get him to the house to get him into dry clothes and try and deal with his injuries. By the time they got there John had passed from shock and blood loss. An hour or so later the brother and doctor arrived, even though he was dead since it was already getting late the doctor agreed to stay clean up the body, in the morning he’d head back to town, tell the preacher, and they’d have a service and try to bury John the next day. They melted some snow in a bucket, and brought the doctor some old rags and he began cleaning up John’s body. The doctor requested a small bowl filled with water and the doctor started pulling small rocks out of John’s legs and dropping them into the bowl. After a bit the doctor pulled out some of the rocks, wiped them off, and held them up to the lantern to see them better.

With a gasp the doctor started towards the door, grabbing his coat, and telling the family to bury or burn John’s body and that he would not do anything else to it or stay a second longer in the house with the body. Confused, the family started begging the doctor to explain what was going on and why he was acting this way. The doctor pulled Richard to the body, grabbed a handful of the rocks from the bowl, and dropped them into Richard’s hand. After getting close to the light to get a better look at the objects Richard turned white and nearly collapsed. The doctor hadn’t pulled rocks out of John’s legs but nearly a dozen teeth and finger bones.

To this day the family is convinced John killed their cousin but the cousin got his revenge.

Big thanks to the fan that sent this in, it’s a great and very creepy story. Remember if you have a story you would like to see get published here, you can email us at webmaster@spookyappalachia.com.

Thank you to our patrons, Alvin, Charles, Donald, Jeff, Josh, Julia and Stefanie. And thank you for reading.