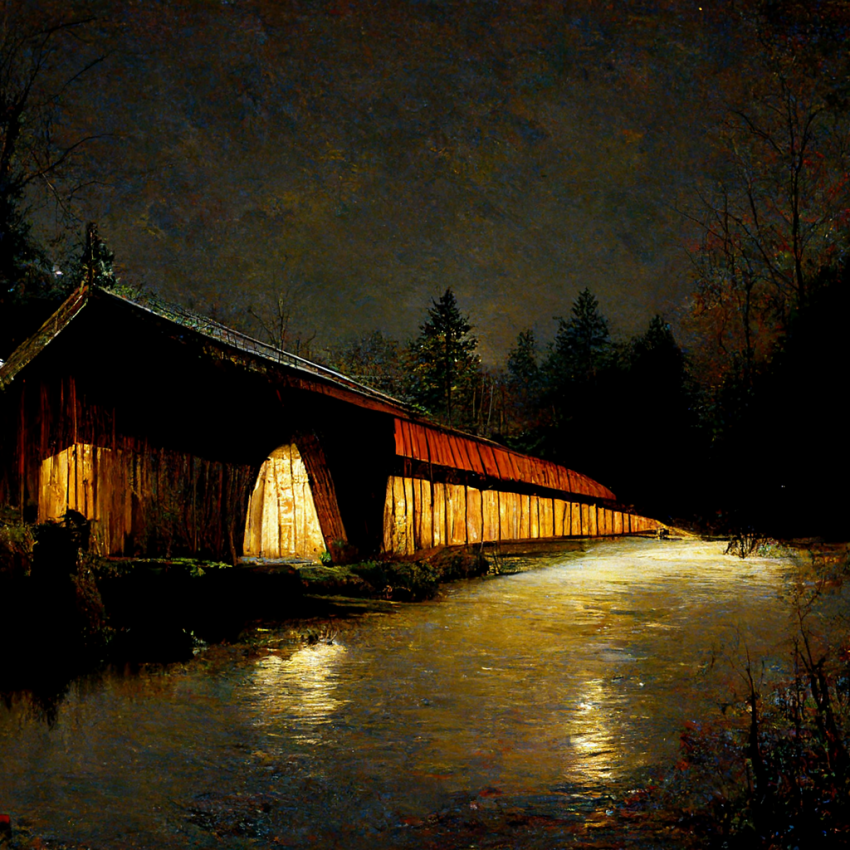 Audio version of this story on our YouTube: https://youtu.be/kx0raTMc1I8 this can also be found Spotify and most other podcast platforms!

This story was sent to us by one of our fans named Linda. This was one of the outside of Appalachia stories that made us decide to start the new submissions From Beyond Appalachia section on the site.

Hello all at Spooky Appalachia; This is the you-tuber, Linda – I am known to my friends as Sasha, so I will refer to myself as Sasha in emails. I have a number of spooky stories for you, although they are not from your area. I lived all over the world, but my stories come from Connecticut and Vermont, for the most part. I lived in Virginia for 15 years, and have one or two from there.

However, today I will be recounting one from Stowe, Vermont, because of your haunted bridge in Radford video.

In the 1850s, Emily, a teenage bride-to-be, was a poor girl who had fallen in love with a local wealthy boy. His parents refused the wedding, and he told Emily to wait for him on the bridge.

Alas, he never showed, and Emily jumped off of the bridge into the brook and rocks below, where she died.

And now on to my experience. I was about 14 years old, and my family lived in Connecticut, but also had a place in Vermont, where we spent much time. I would sometimes go with friends to a pizza place outside of Stowe. A group of us were heading back from the pizza place on a late fall night, so it was dark and cold. My friends said, “ Let’s go over Emily’s Bridge, it is supposed to be haunted.” I was a bit hesitant, because I was a magnet for the paranormal for all of my young life. I was not afraid, but I still was startled when I had an encounter. We drove onto the bridge and parked the car. My friends wanted to get out and look for Emily. Me, not so much, but I agreed, not wanting to be left alone in the car on a dark, dirt road  on a wooden bridge many feet over a brook. We all walked around, but there was nothing. Still, I was getting my “psychic hotline network” vibes…

We got back into the car, and started the car, turned on the lights. Everyone else was making fun of the legend. Ugh, never do that. All of a sudden, the car died. Every electrical part of the car was completely dead. No engine, no heat, no headlights.. we could not get that car started, no matter what. My friends began to panic, because it was a desolate area, at night and very cold. We were still sitting smackdab on the middle of the bridge. My friends were just talking about who was going outside to pop the hood, and see what was wrong.

Suddenly, the radio came on by itself, the only light in the car, the only part of the car that was actually working. And a song came on the radio…” Emily”. I kid you not. Loud and sad, sung by a woman singer. This song was an Elton John song, but it was being sung by the saddest female voice. Needless to say, everyone screamed and panicked, because now we knew that she was there.

Thankfully, out of the blue, the car started on its own right then..

We were out of there, none of us wanting to ever talk about it. I have not had the chance to go back, but seeing as we will be moving, I will visit there, as an adult. And I will not make fun of Emily.

Lyrics to this song:  Emily

When the summer bends to the winter’ rage

Emily walks through the cemetery

Passed a dog in an unmarked grave

Talks to her sisters in the ground

I saw a lie in the mirror this morning

I heard a prophecy all around.

And Emily they come and go  (chorus)

The shadows and the distant sounds

But Emily don’t be afraid

When the weight of angels weigh you down.

Emily prays to a faded hero

In a little frame clutched to her gown

Hears the voice of promise in his memory

Tonight’s the night they let the ladder down

In a cage sits a gold canary

By a wicker chair and a rosewood loom

As a soul ascends aboard the evening

Canary sings to an empty room

( reprise of the chorus)

Now, think of these lyrics and the story that I told you. That was the scariest part of the whole evening. And I have never forgotten this. I hope that you enjoyed my story as I have more and scarier experiences.  Take care, Sasha

Thank you Linda for this great story! We decided to start a brand new section on the site just for this! I know you have more stories you said you’d send along and I can’t wait to hear them! If you have a submission you’d like to see make its way to the blog and our various other platforms you can email us a submission at webmaster@spookyappalachia.com.

Thank you to our patrons, Alvin, Charles, Jeff, Josh, Julia and Shannon. And thank you for listening.