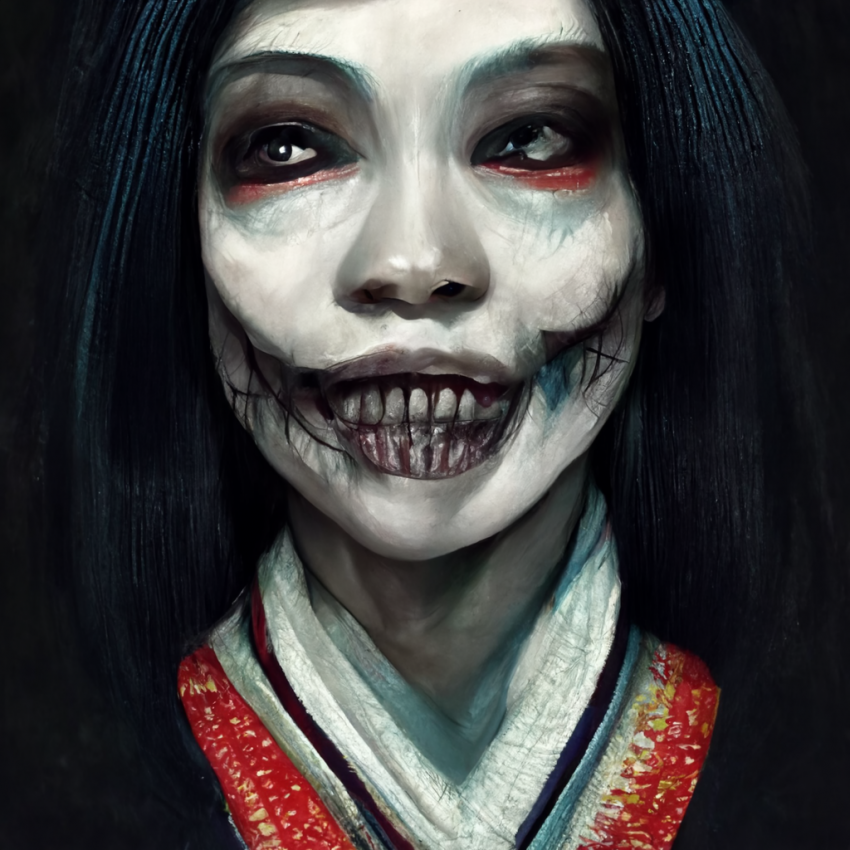 According to Japanese legend, Kuchisake-onna, or the Slit-Mouthed Woman, was a human woman who was mutilated during her life. Her mouth was slit from ear to ear, like The Joker in 2008’s The Dark Knight. In some versions of the story, Kuchisake-onna was the adulterous wife of a samurai during her life, and, as punishment for her infidelity, her husband sliced the corners of her mouth from ear to ear. Other versions of the lore include that her mouth was mutilated during a medical or dental procedure, that she was mutilated by another woman who was jealous of her beauty, or that her mouth is filled with numerous sharp teeth.

After her death, the woman returned as a vengeful spirit, or onryō. As an onryō, she covers her mouth with a cloth mask (often specified as a surgical mask or, in some iterations, a hand fan or handkerchief). She also carries a sharp instrument with her, which has been described as a knife or a large pair of scissors. She is said to ask potential victims if they think she is pretty or attractive.. If they answer “no,” she will kill them with her weapon, and if they answer “yes,” she will reveal her mutilated mouth. She then repeats her question, “Even now?” If the individual responds with “no” or screams in fright, she will kill them with her weapon. If they respond with “yes,” she will slice the corners of their mouth from ear to ear, resembling her own disfigurement. It’s said that the only way to survive the encounter is to answer, “so-so” or “What do you think?” to confuse the spirit. I’ll be giving you one of the most commonly told stories of the Slit-Mouthed Woman from Japanese culture.

Many years ago there was a young man of 20 called Kosuke, who worked at a shop called Daikokuya in Motogikucho, Edo. Being a fresh new employee, he was asked by his boss to run an errand in Ookubohyakunincho (present day Shinjuku). He was asked to deliver a letter and wait for the reply, but the reply took a considerable amount of time. By the time he was able to return, the sun was already setting, and, to top it all off, it had started to rain. Kosuke pulled out his umbrella and lit a lantern, then put the letter in his pocket and hurried along the street back to the shop.

Along the way he noticed a young woman, soaked and running along the street.. He called out to the woman and told her he was returning to Motogikucho, but if she would like to share his umbrella along the way she could. The woman stopped dead in her tracks and quickly turned around. The moment she did, Kosuke screamed and fell backwards. The woman’s mouth was cut from ear to ear. Fangs jutted out, and her eyes sparkled at the sight of him.

Kosuke had worried about returning to the shop late but ended up being carried back. On his arrival it was as though he had aged all at once. His teeth had fallen out, and his face had grown old. Without saying another word, he took his final breath.

There were several Slit-Mouthed Woman sightings in the area at the time. It is believed that Kosuke was attacked by her based on the story he told them men who found him.

Checkout our other ghost stories